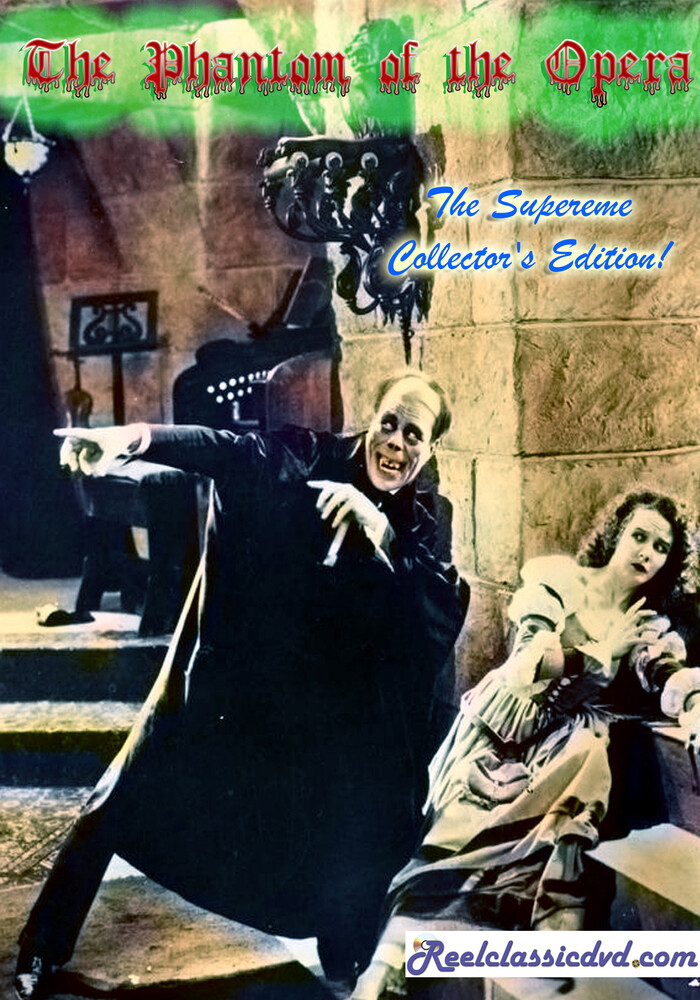 THE PHANTOM OF THE OPERA (1925/1930): The Supreme Collector's Edition So, you think you've seen everything available on THE PHANTOM? Here's a very special DVD set for those of you who think you have, but wish there were more! THE PHANTOM OF THE OPERA directed by Rupert Julian with Lon Chaney, Norman Kerry, Mary Philbin, Arthur Edwin Carewe, Gibson Gowland, John Sainpolis and Snitz Edwards. A Universal Super-Jewel. Horror! Thrills! Macabre! "The Phantom of the Opera", one of the most famous films ever made, presents the story of a creepy misanthrope who kidnaps a prima donna of the Paris Opera so that she may bring him the love he so madly desires! This edition presents a brand-new, needle-sharp transfer of the prized Essex Films/Griggs-Moviedrome version of the 1930 release. Complete with the famous "man with the lantern" opening (voiced by John Griggs) and the soaring, exciting pipe organ score performed by Lee Erwin - newly re-mixed for stereo! This is the only authorized release of this much esteemed, copyrighted, version of the film. "SCREAM SCENES": The Phantom of the Opera". A short film containing some very unusual title cards believed to be from an earlier version of the film as well as a brief "lost" scene of Lon Chaney at the organ. The boudoir scene, long ravaged by nitrate decomposition, appears here in near pristine condition. "THEATRICAL TRAILER". Newly reconstructed. Available nowhere else, our version is taken from several sources and blended together to yield the best, most complete trailer possible. "THE PHANTOM OF THE OPERA: 1930 VS. 1925". An exclusive feature length production created and introduced for this edition by Keith Paynter. Using the 1930 re-release as a foundation, a wide-screen, side-by-side and scene-for-scene comparison is made between the 1930 and the 1925 releases. The sometimes subtle and often unmistakably distinct differences between camera angles, title cards and alternate takes are plainly seen. Fascinating! TWO COMPLETE VERSIONS OF THE 1930 RELEASE. Ever since the discovery of the early Technicolor Bal Masque footage, the black and white version of the scene (which is very different in content) has become rather rare. Here we present two versions of the film. One containing the color footage, the other in black and white. THE ORIGINAL 1925 RELEASE. The film as originally presented in 1925, more than 30 minutes longer than the 1930 release. This version contains additional scenes and a more complex story with title cards that also differ from the later release. Though existing sources are only fair in quality, many prefer this original version of the film. It is presented here with the color Bal Masque de l' Opera scene for historic accuracy and a brand-new, spine-tingling pipe organ score composed and performed by Ben Model! "COLOR VS. BLACK AND WHITE". An amazing wide-screen, side-by-side comparison between the Bal Masque de l' Opera scene in color and it's black and white counterpart. With commentary by Keith Paynter. BONUS CHANEY FILM: "THE LIGHT OF FAITH" (1922) starring Lon Chaney, Hope Hampton and Dorothy Walters. Directed by Clarence Brown. Chaney portrays Tony Pantelli, a small time crook, who cares for a sick girl and falls in love with her. In an effort to cure her, he steals the recently discovered Holy Grail which glows in the dark and has the power of healing the sick. The film was justifiably praised for it's beautiful photography and is presented here in a new razor-sharp transfer with the lovely original tints and a terrific piano score by Stuart Oderman which has been newly re-mastered for stereo.